i.e. Things to make with fabric. I just wanted to make a list for myself of all the projects I could do with the store of fabric that I have. Because when I think of using it, all I usually come up with is making a pillow.

I'm sure there are a million more things, but these are just the things I am most likely to make. And after I started writing this list down, I did a Pinterest search and came across this site, with a more extensive list.
at 8:02 PM 2 comments

My first experience with Borscht (a Russian soup made from beets) was in Wien (Vienna) on my mission, 7 yrs ago. My comp, Daina Svara was from Latvia, and thus, spoke Russian. That meant we got to travel across the zone to teach any Russians. At the time there was a recently baptized Russian family - 3 generations of women - Lydia, Marina, and Victoria. Such wonderful, amazing, strong women. I still love them. They were there on assylum, which means they had nothing and were living in government housing, receiving very meager money from the government for food and basic needs. But every time we visited them, maybe once every 1-2 weeks, they gave us tea, house shoes to wear, cookies, etc. And one time they fed us Borscht. They had a one and a half room apartment, and they were feeding us! Still melts my heart. They loved us and we loved them, dearly.

Daina would teach, as well as translate whatever I said, and I was able to pick up a little here and there of what they were saying, which I and they were always delighted about :). When Daina was trying to explain to me what was in Borscht, she couldn't come up with the German or English word for beets. "Es ist rot, rund..." (It's red, round...) I think it wasn't until after my mission that I figured out BEETS! I made it once from memory after I got home, but haven't made it since. I made it the other day after buying beets and cabbage, but couldn't find a recipe that sounded quite right. So, again from memory and with a little help from online recipes, this is what I came up with.

Oh, and if you've never had beets, or don't like beets, this will open your eyes. It's so delicious.

Throw it all in a pot and let it cook for an hour or more, covered, over medium heat. Everythimg should be soft and the chicken cooked through (no blood near the bones). Remove the chicken to a plate and shred, discarding the bones. You can discard the skin, too, if you'd like, but Russians don't - waste not, want not. Adjust salt and dill as desired. Serve with some hearty bread.
at 10:06 PM 0 comments

I saw a list on Pinterest of 15 Things a Mom should teach her boys (found here, for your reference). I didn't like/agree with all of them, so I wrote up my own. 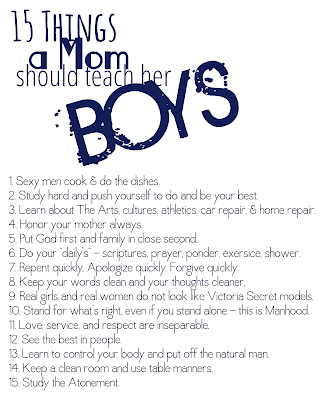 I was talking to a friend yesterday about how going off birth control doesn't mean you'll instantly get pregnant, like you think it will. Which can be hard because you've decided that you're ready now for a baby, and then it doesn't happen for a while. My sister-in-law also just had a baby while we were visiting for the Christmas holiday (YAY!), which you can see here, so yesterday I was thinking about how all babies, especially those born healthy, are miracles in every way.

I thought about my little miracle, Jason. It was his birthday yesterday - he turned 3! And I realized that I see a miracle every day! He is my walking miracle! So I decided to put that thought on paper to frame. Here it is. 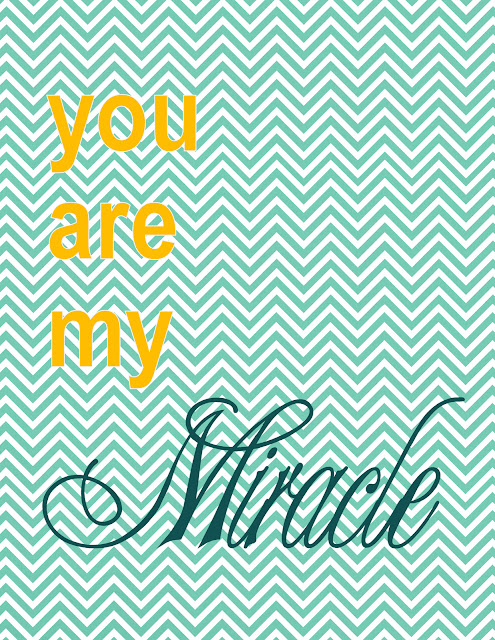 Does anyone else eat toast with butter and cinnamon-sugar on top?

Toast has been a long-standing go-to snack in our family (cousins included). I think particularly in the evening. Why? It settles your stomach, it fills that almost-but-not-quite-hungry void before bed without being too heavy, and it's comforting. And all toast has to have butter on it.

It's like eating toast with apple pie on top. Minus the apples. I was reading on Sarah Britton's blog My New Roots (I love what she does with cauliflower) about the health benefits of certain spices and thought a little nutmeg on my toast-only diet right now might help and would change it up a bit.

In a small bowl, mix cinnamon and nutmeg. (You can use a spoon, fork, wisk, your finger, or you can just swirl the bowl around so they get mixed together.) Toast your bread to desired toast-iness. Spread one side with real butter. Sprinkle mixture over that. Enjoy those apple pie memories.

Oh, and for toast with jam and cheese: use butter, then strawberry jam, topped with a slice of real cheddar cheese.
at 11:45 PM 0 comments

Wow. I completely fell off the wagon. It's been over a month since I posted. Woops!

Let me explain. Back in July, I was prepping for my parents' mid-August arrival. My brother Rob with wife Crystal and son Asher were coming too. I had been keeping a running list of projects to do while they were here, but then realized some of them I could just do myself. So I tried to get as many of those smaller projects done before they came so that I wouldn't feel like the list was overwhelming. Here are a few teasers: 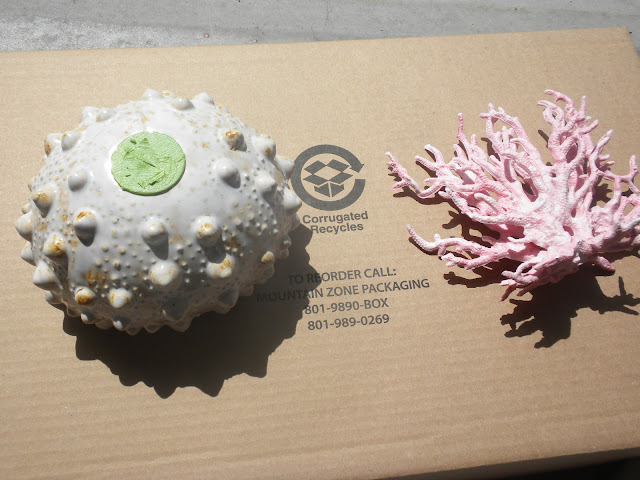 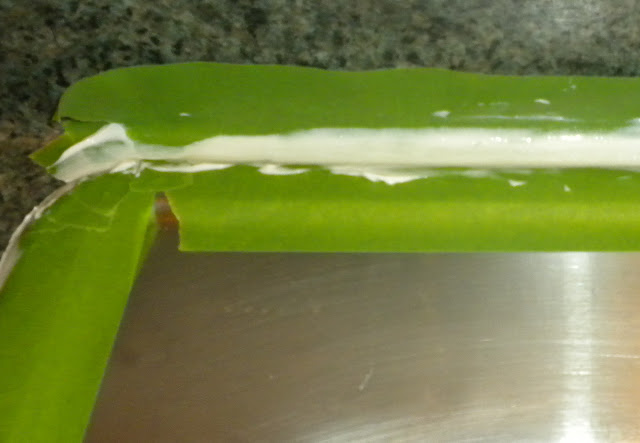 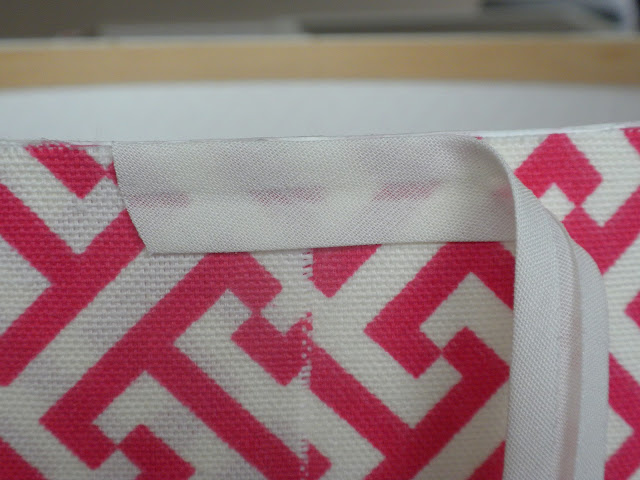 That, on top of cleaning everything.


Basically, I got so busy doing projects﻿, cleaning, hosting parties, hosting family, etc that I stopped blogging about it. And the day my parents left, my computer's hard drived died. Completely. ...I wonder if it had anything to do with Jason squirting about a tablespoon of hand soap on the keyboard last month.... Luckily Dave had made a backup image a few months ago, so most of my stuff was saved. PHEW! He put the image on my new hard drive about a week ago. And here I am. Writing this catch-up post. And here you are. Reading it. Much obliged.

It was so great to have them all here. We went from 2 in this small house to 7! Mom & Dad slept in my room, I slept on the futon in the playroom/front room, Rob & Crystal slept in the living room on a big air matress, and Asher slept in a borrowed pack-n-play in the office/craft room. In other words, there was someone sleeping in every room of the house. Except the kitchen, of course.

Jason and Asher had a great time together and even took their regular naps, despite all the extra activity and noise in the house.

Even though these aren't good pictures, I love some of their expressions. 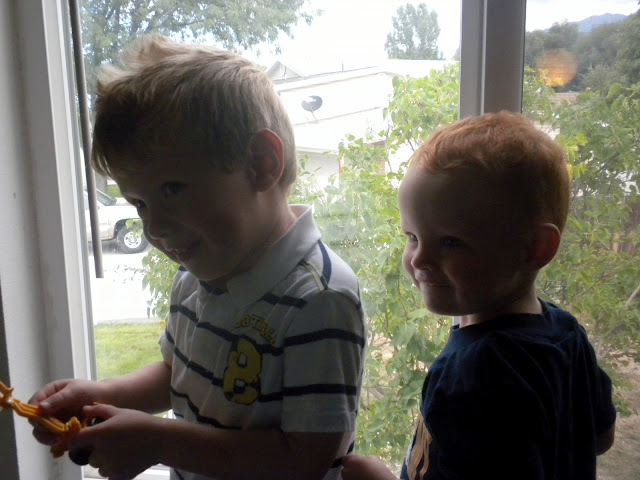 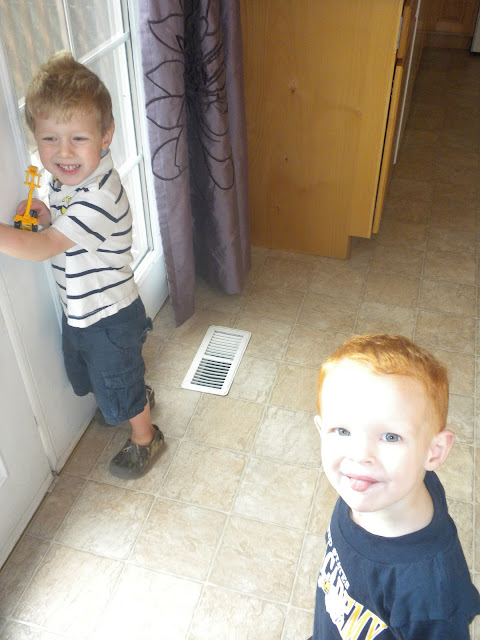 Trying to give each other a high five: 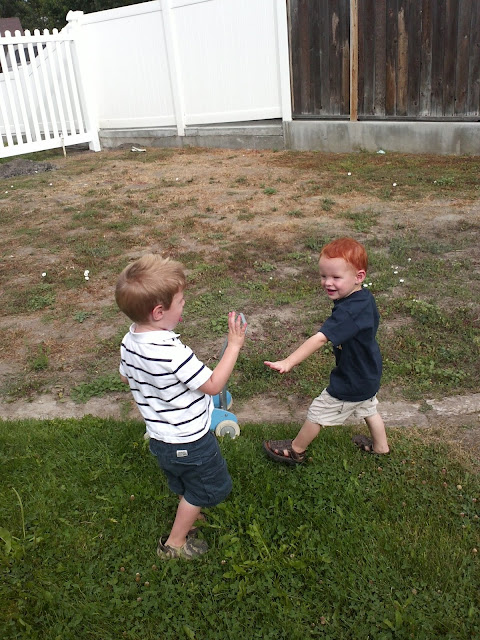 It was about 10 days of projects, projects, projects - taking down my dangerously precarious wood fence, installing a vinyl fence, replacing two light fixtures, making a third light fixture, a couple trips to Ikea, several to Lowe's and Home Depot, putting together two more chairs (so everyone could sit around the dinner table), and hanging a mirror. Wow. On top of that, Rob, Crystal, and Asher took a trip in the middle of those 10 days to visit some of Crystal's family a few hours away in Roosevelt/Vernal. And while in the Vernal area, he also did some concrete work for Crystal's grandparents - repairing a concrete slab in front of their house. And on top of that, Rob was trying to study for a final that he had to take during their stay. An engineering final. Not just some easy-peasy class final.

This is what my garage looked like at the height of project-ing. 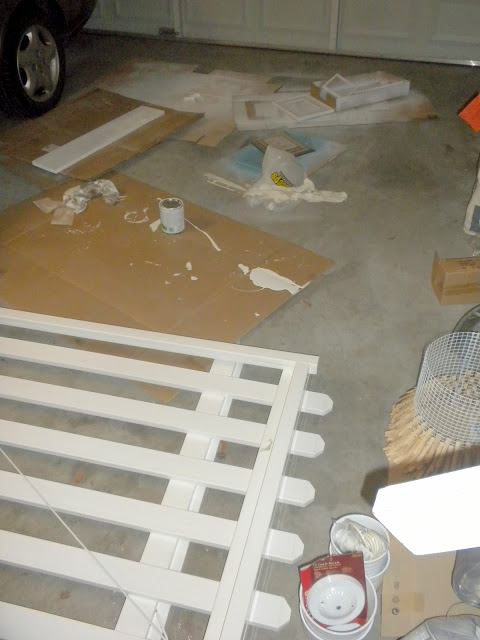 But being the amazing brother that he is, he even squoze (that's the new "squeezed" - it's better, don't you think?) in a game of Zilch. That was probably the highlight of the whole visit. We all played (even Mom!) and had so much fun teasing each other and laughing laughing laughing. Mom and Crystal laughed so hard that they started to cry! It's a great feeling to make people laugh that hard. And my brother's agree - there's something sooo great about being able to make your parents laugh. I have the best family!! 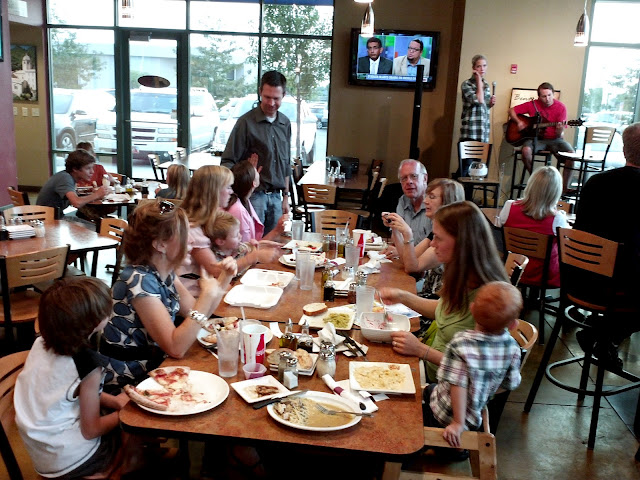 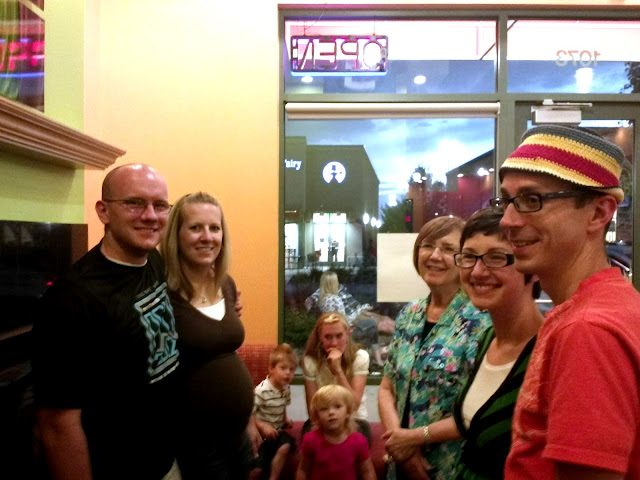 Double Oh! The night my parents were coming in, I hosted a birthday/going away party for Brandon & Lisa and their little girl Ashlynn (she was turning 3). That was a lot of fun too. A few other old Toledo friends showed up for that - Dan & Ashley, Tom and Lovetta Reyes-Cairo, Mike & Rachel Benner. And Jason made sure to walk by the huge double chocolate Costco cake as much as possible so he could swipe the frosting as he passed. 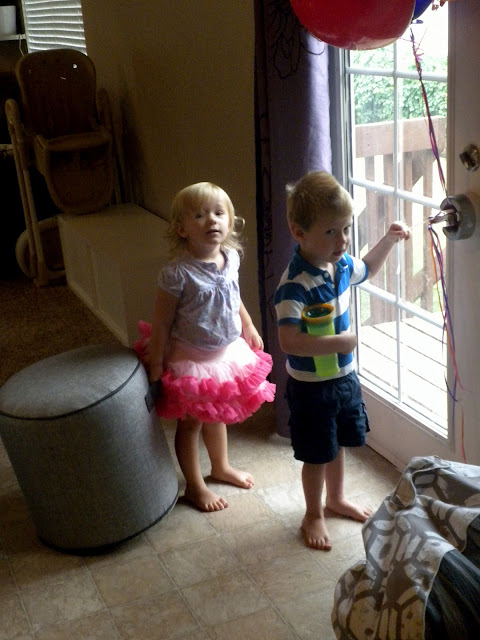 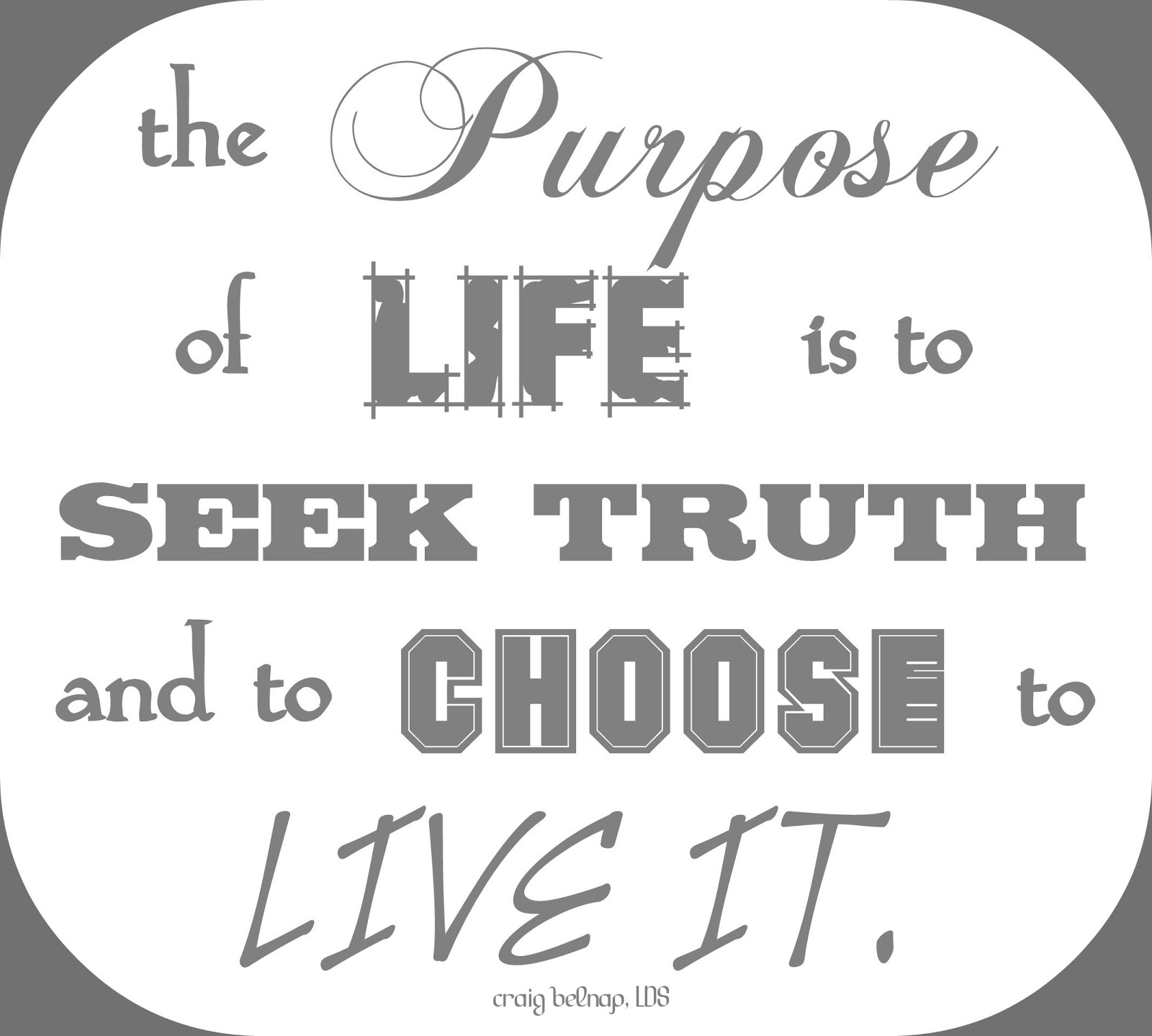 What I believe, in my own words, as a member of the Church of Jesus Christ of Latter-day Saints:
You Matter to Him
and some of my favorite spiritual things.